Gave myself a fun challenge for 4/20. It’s very common for joints to be rolled by hand in Vietnam, which means a lot of weed grinding. Watching friends and people at bars doing this so much, it made me rethink the current grinder design. A circular twisting motion to me feels unnatural, requires two hands, and doesn’t store well. Revisiting it, I wondered if it’d be possible to create something that’d fit in the palm of one hand, about the size of a lighter, that could be used to grind weed through a linear sliding motion. For whatever reason I’ve been unable to find anyone who has tried this, so check it out: 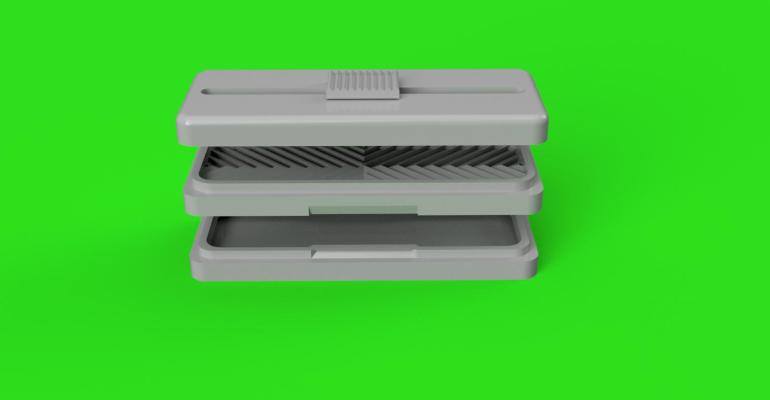 To break down the layout, the top shell is a press-fit that contains the slider – to be used with the thumb – to move up and down. The middle layer contains some chevron shaped slits with 1mm clearance and angled at the edges to try to provide a slicing motion. Finally the bottom shell is a snap-fit on the sides, that will store the ground weed.

Before you ask, yes I still need a kief catcher. I’ll probably add a slot on the bottom shell to slide a piece of mesh through, but for now getting the grind just right is the highest priority. It has to be a perfect balance of force and grind fineness, I don’t want people stressing their thumbs and I don’t want it to do a poor job grinding.

This is the first time I’ve ever animated anything in Fusion 360, so I’ll be the first to admit there’s a certain awkwardness to the movement. To be honest, I’m not particularly impressed with Fusion 360’s animation, it’s incredibly bare bones. For future projects it’s likely I’ll take a model output and try to feed it into Blender to get a much richer animation environment, but we shall see there.

For some additional details of its assembly, check out the instagram post below. Thanks for checking this out.

Happy #420 fam. Wanted to share a weed grinder I've been working on for a friend. Still new to CAD animations so bear with me there, but thought I'd show more of my 3D printing projects. We'll see how well it actually grinds.

I try to make things, with my trusty 3D printer sidekick. View all posts by Nick Lavalle